There are generally two approaches to render images:

Finding an analytic solution to the full 4D region-to-region integral is challenging. This paper presents a geometry vectorization method that can compute its 2D point-to-region sub-problem. The method is based on beam tracing, which traces beams from a shading point $x$ to area lights.

Reformulate the received radiance $L(x)$ as

Moving the visibility function from the integrand to the integration domain by defining $Q(x)=\{\omega|V(x,\omega)=1\}$ as a set of spherical polygons, which are formed by projecting all the visible regions of area lights onto the unit sphere centered at the shading point $x$

Key: computing all the visible regions of area lights $Q(x)$ within the beams using a binary Visibility Bounding Volume Hierarchy

In practice, most of the 4D region-to-region light transport problem can be factored out into several point-to-region subproblems.

Use a hybrid approach to estimate the 4D region-to-region integral:

This paper focus on evaluating 2D point-to-region integrals in the following form:

Many problems in rendering, e.g. shading with area lights, can be formulated in this form of integral

Therefore, we can transform all the 3D triangles according to the perspective projection matrix. After the projection, all the relevant triangles are in the normalized device coordinate (NDC) space, i.e., the $x$, $y$ and $z$ coordinates of triangle vertices are within $[-1,1]$. The occlusion between the original 3D triangles can be equivalently resolved using a set of 2D projected triangles $\{\Delta_i\}^n_{i=1}$ and their depths $\{z_i\}_{i=1}^n$ 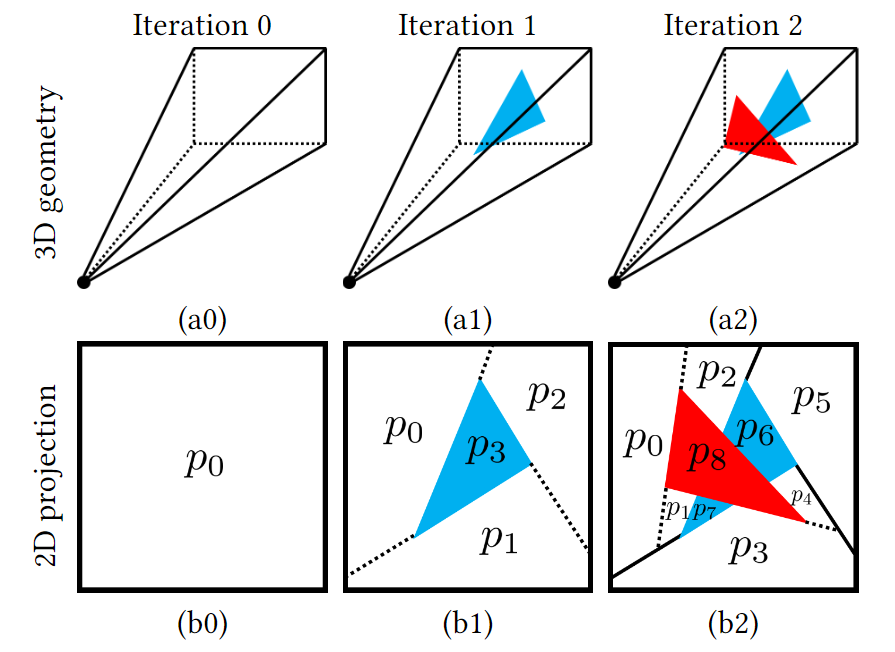 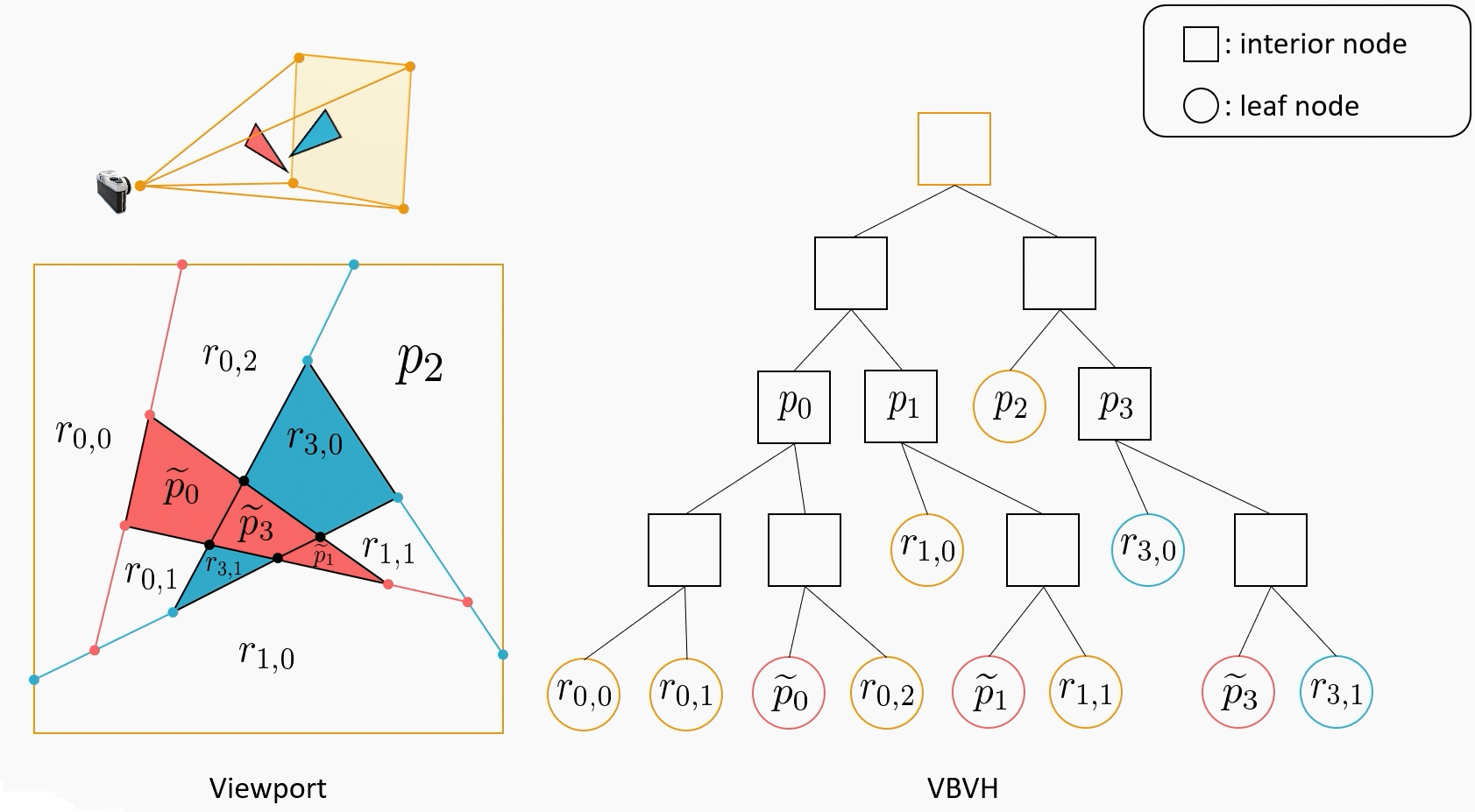 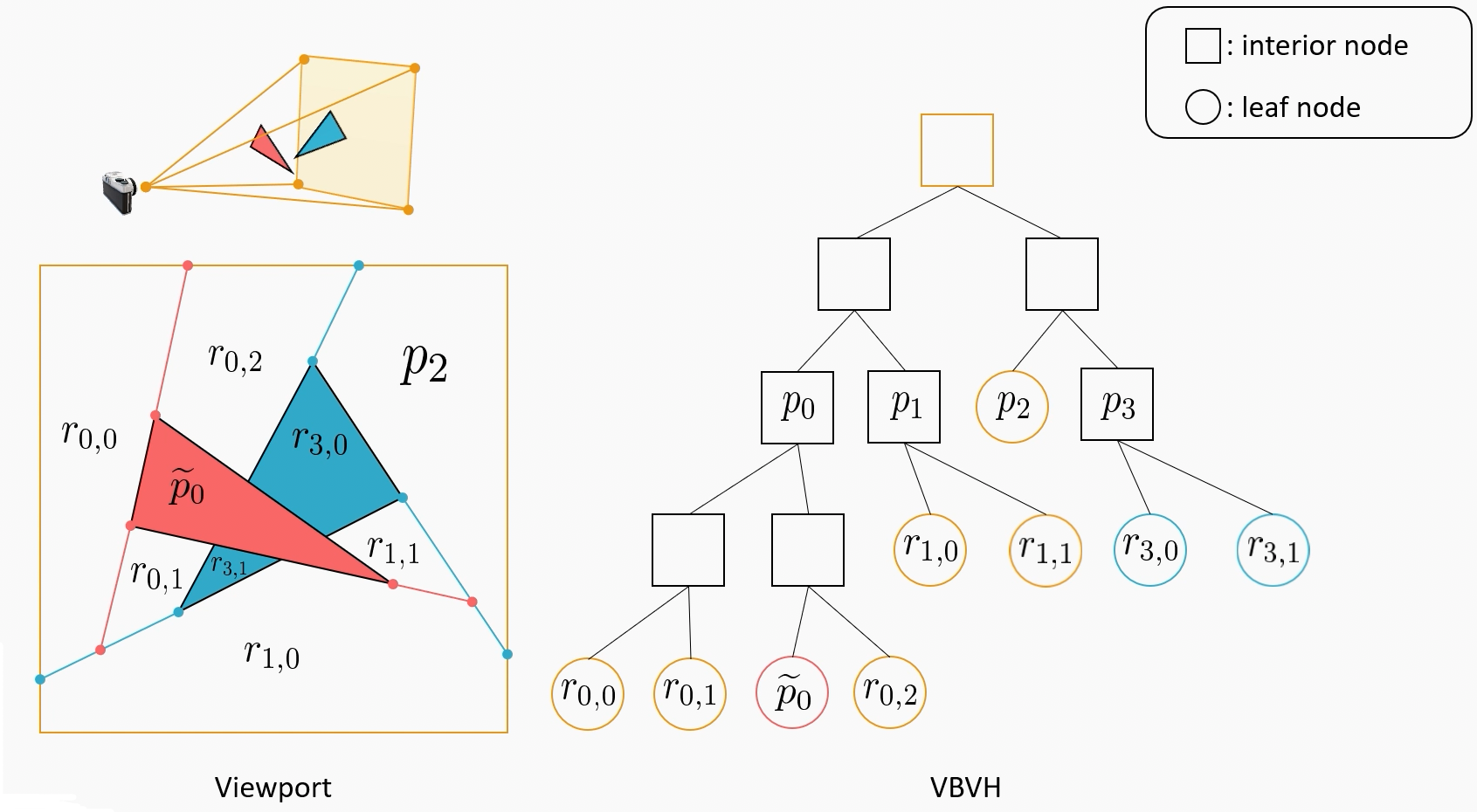 Primary visibility is used to determine the occupied area of visiblepolygons inside a pixel. For traditional rasterization or ray tracing methods, it is common to get aliased results due to the insufficient sampling rates, especially at the object’s boundary regions that have many sub-pixel geometric details.

For each pixel on the image plane, we create a beam that originates from the camera and goes exactly through the pixel. Assuming the pixel is a square of $[-1, 1]^2$, the pixel color is

Let $\{p_k\}^m_{i=1}$ be the set of 2D regions generated by previous visible polygon computation, and $\{c_k\}_{i=1}^m$ be the corresponding colors. The pixel color can be reformulated as a summation

Assume that the area light emits constant radiance $L_e$. The received radiance at a shading point $\pmb x$ from area lights is

To compute $Q(\pmb x)$, we create a beam from the shading point $\pmb x$ to the area light sources.

Use previous visible polygon computation to find the visible regions representing the area lights. Then project them onto the unit sphere centered at $\pmb x$ by the inverse perspective projection, resulting in a set of spherical polygons $\{Q_k\}_{k=1}^m$. Then we can rewrite the shading integral as

The integrals over spherical polygons $I_k$ can be approximated analytically using Linearly Transformed Cosines (LTCs). Fitting the cosine-weighted BRDF (the integrand of $I_k$) by an LTC with the transformation matrix $M$. The integral $I_k$ has an analytic solution: 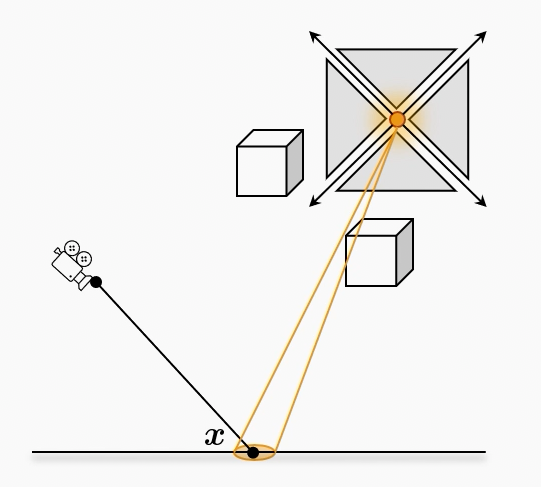 The shading of a polygonal surface patch that is seen through a pixel and is lit by a point light can be formulated as a 2D integral:

Assuming the footprint is small enough compared to the size of the scene, we can approximate by splitting the integral into two parts:

The second visibility integral becomes the area of the visible polygons:

which has analytic solutions given polygon vertices

In practice, instead of computing the visible polygons $Q(\mathcal P)$ for each pixel footprint, usually precompute a vectorized shadow map that records all visible polygons from all directions as viewed from the light position. 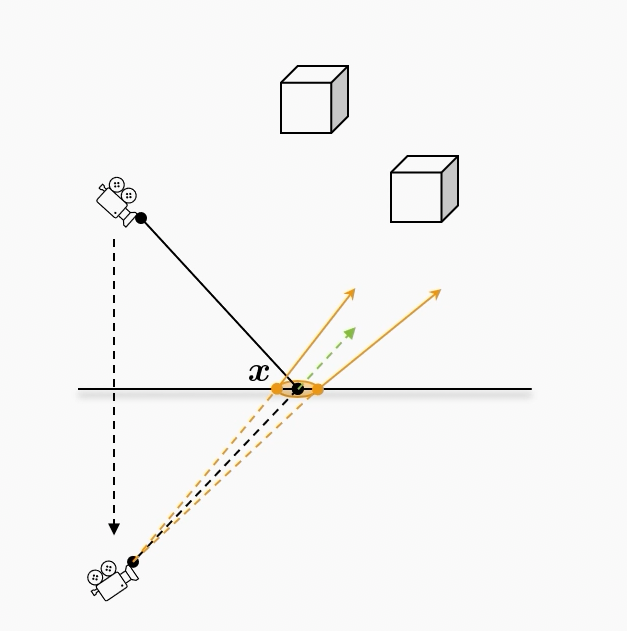 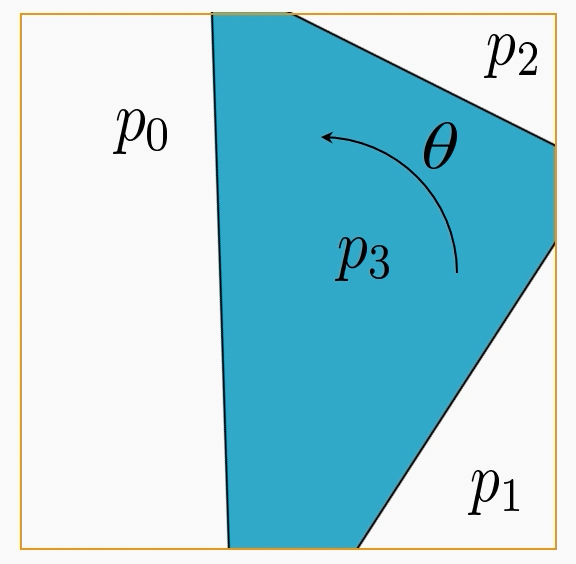 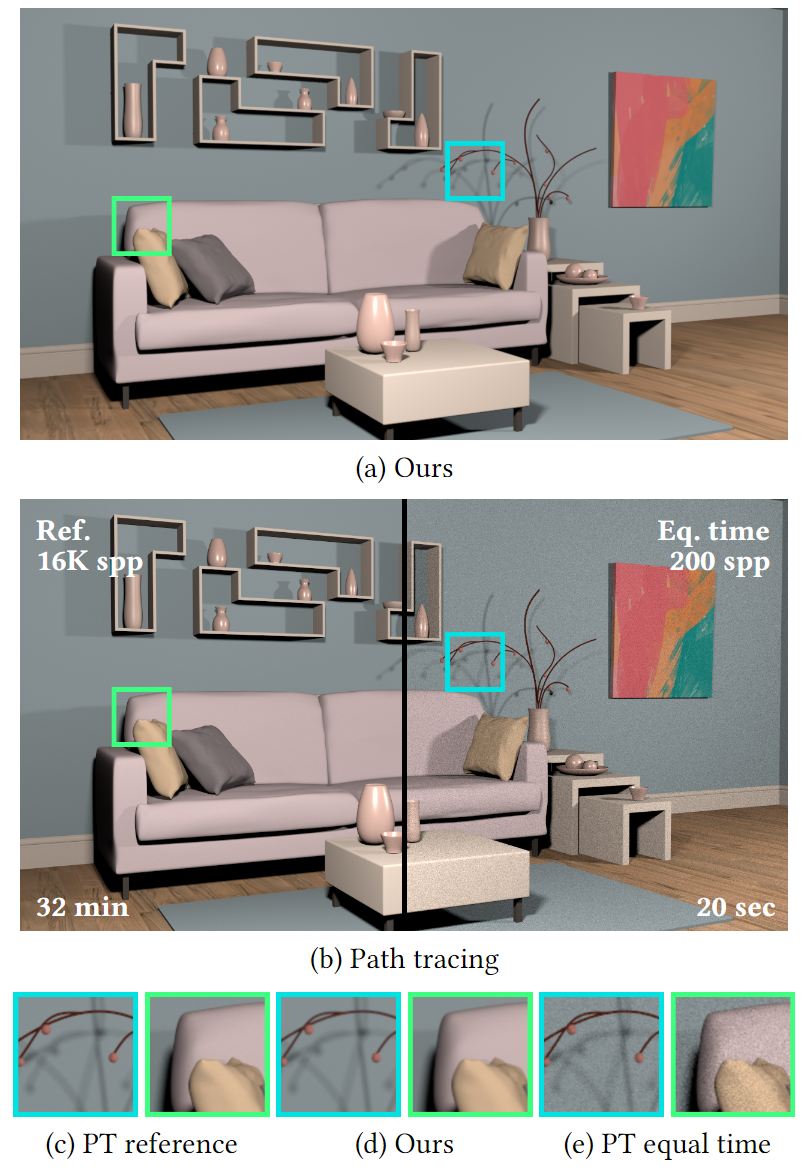 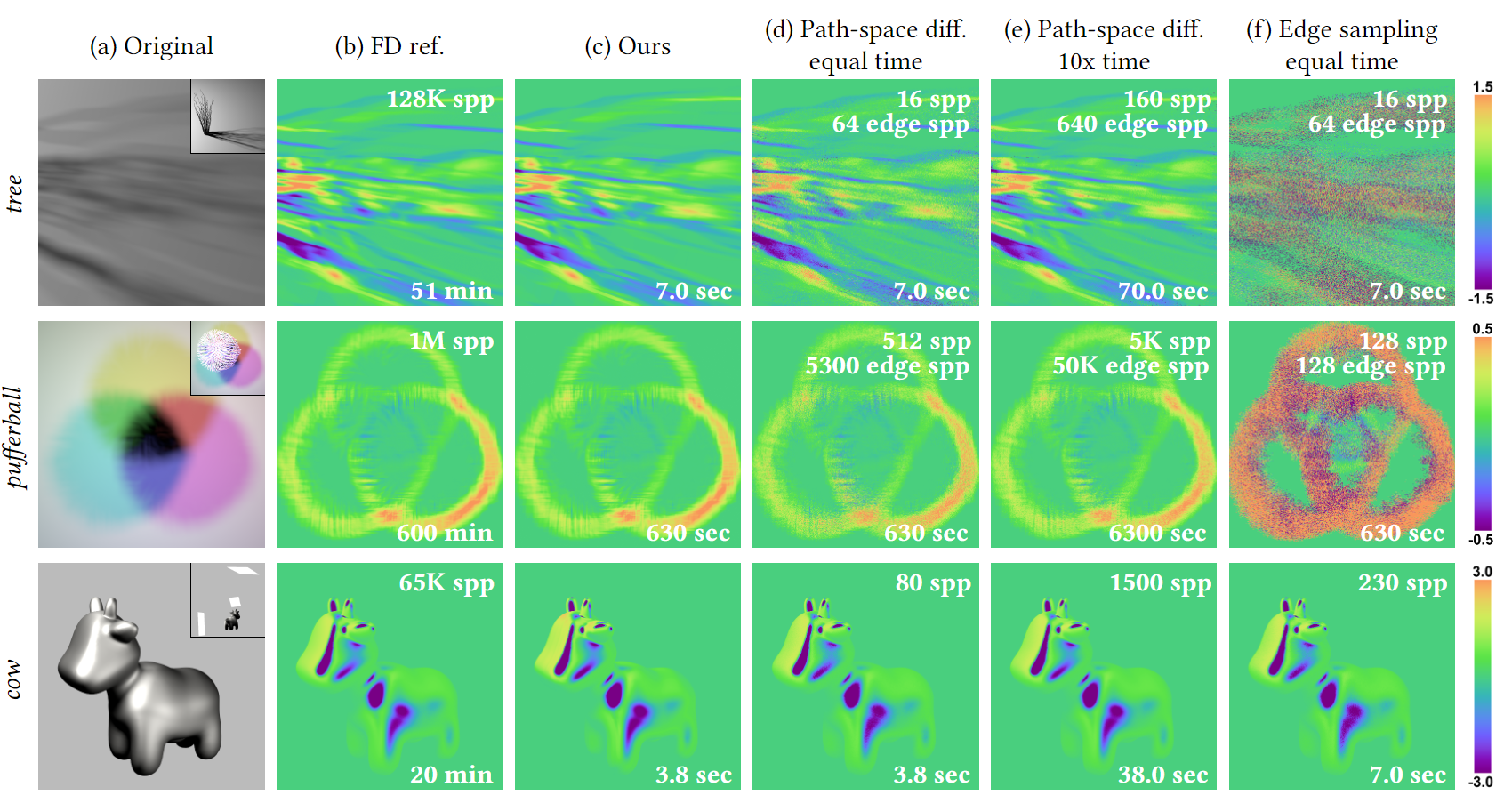